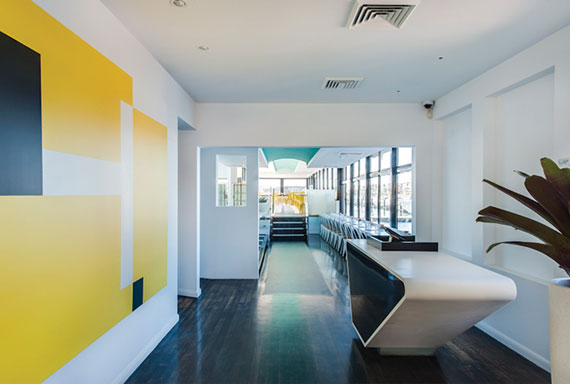 Home to one of the most beautiful skylines on Earth, Sydney is also the most populous city in Australia. Its inhabitants refer to themselves as “Sydneysiders,” a play on the term “seasider,” since the city is situated on the Tasman Sea.  No matter where they reside or what they do from 9 to 5, Sydneysiders adore water sports. Swimming, surfing, diving, and sailing are extremely popular with locals and tourists alike. But after all that activity, most folks want to relax by the sea with a drink in their hand and good meal.

Inspired by the style and energy of the waterside lifestyle of Palm Springs in the 1960s, The Sailors Club lets guests to take a trip back in time while they dine. Located on Sydney Harbour at Rose Bay Pier, the owners of the popular eatery were guided by the photographs of Slim Aarons, who captured au courant waterside resorts during his celebrated career.

Visitors are often struck by the minimalistic decor and bold colours, such as canary yellow on the walls and turquoise furnishings. The Sailors Club also features prints and paintings from new and established artists from around the world. Not to mention the magnificent water views!

Of course, the Sailors Club didn’t become one of the best restaurants in Sydney because of its location or decor. Somebody actually has to cook and serve the food! Executive Chef Steven Skelly created an eclectic menu that offers something mouth-watering for just about everyone. Because it is a seaside eatery, the chef and his team of culinary experts focus on seafood. Signature dishes include Sugar Cured Ocean Trout, Fresh Oysters, and Flathead in Cooper’s Batter, Chips & Tartar Sauce.

But as one of the best Sydney restaurants, the Sailors Club also offers a wide range of options for guests who don’t like seafood. In fact, some of the most popular dishes on the menu are traditional comfort foods, such as their Osso Bcco with Wild Olives, Three-Cut Burger, or Brick Chicken with Lemon Thyme & Oregano Gremolata.

Another reason the Sailors Club is considered by some to be one of the best restaurants in Sydney is their drink menu. Signature cocktails are available at any time of day. Prohibition Punch, Regal Rogue Twist, and Sailors Martini are just a few of the delicious and original potent potables on their daily menu.